Blues that are green 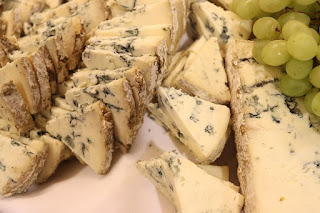 The Blues that Are Green

Stilton, Roquefort and Gorgonzola form the triumvirate that rules a world of lesser Blues. They are actually green, as green as the mythical cheese the moon is made of.

In almost every, land where cheese is made you can sample a handful of lesser Blues and imitations of the invincible three and try to classify them, until you're blue in the face. The best we can do in this slight summary is to mention a few of the most notable, aside from our own Blues of Minnesota, Wisconsin, Oregon and other states that major in cheese.

Danish Blues are popular and splendidly made, such as "Flower of Denmark." The Argentine competes with a pampas-grass Blue all its own. But France and England are the leaders in this line, France first with a sort of triple triumvirate within a triumvirate—Septmoncel, Gex, and Sassenage, all three made with three milks mixed together: cow, goat and sheep. Septmoncel is the leader of these, made in the Jura mountains and considered by many French caseophiles to outrank Roquefort.

This class of Blue or marbled cheese is called fromage persillé, as well as fromage bleu and pate bleue. Similar mountain cheeses are made in Auvergne and Aubrac and have distinct qualities that have brought them fame, such as Cantal, bleu d'Auvergne Guiole or Laguiole, bleu de Salers, and St. Flour. Olivet and Queville come within the color scheme, and sundry others such as Champoléon, Journiac, Queyras and Sarraz.

Of English Blues there are several celebrities beside Stilton and Cheshire Stilton. Wensleydale was one in the early days, and still is, together with Blue Dorset, the deepest green of them all, and esoteric Blue Vinny, a choosey cheese not liked by everybody, the favorite of Thomas Hardy. 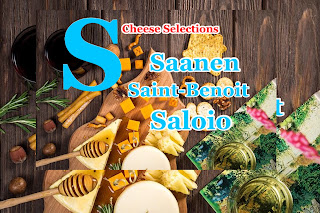 The cheese dictionary. Some of the S selections 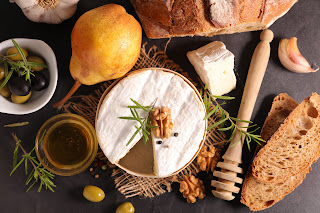 Camembert Cheese - Napoleon is said to have named it..