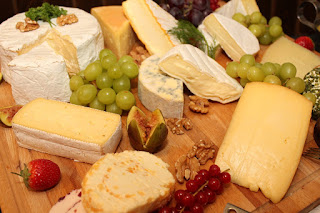 Hard; buffalo milk; mild Provolone type. Also called Pear from being made in that shape, oddly enough also in pairs, tied together to hang from rafters on strings in ripening rooms or in the home kitchen. Fine when sliced thick and fried in olive oil. A specialty around Naples. Light-tan oiled rind, about 3½ by five inches in size. Imitated in Wisconsin and sold as Pear cheese.

Stracchino Crescenza is an extremely soft and highly colored member of this distinguished family.

Hard; sheep or mixed sheep, goat or cow; from Pontgibaud and Laqueuille ripening caves. Similar to better-known Cantal of the same province. Akin to Roquefort and Stilton, and to Bleu de Laqueuille.

The name of imitation Brie or Brie type made in all parts of France. Often it is dry, chalky, and far inferior to the finest Brie véritable that is still made best in its original home, formerly called La Brie, now Seine et Marne, or Ile-de-France.

Semihard; whole fresh milk; takes three weeks to ripen. Also sold "green," young and innocent, at the age of ten to eleven days when weighing about that many pounds. Since it has little keeping qualities it should be eaten quickly. Welsh miners eat a lot of it, think it specially suited to their needs, because it is easily digested and does not produce so much heat in the body as long-keeping cheeses.

More of a dessert than a true cheese. We read in Scotland's Inner Man: "A sort of fresh cream cheese, flavored with chopped orange marmalade, sugar brandy and lemon juice. It is whisked for about half an hour. Otherwise, if put into a freezer, it would be good ice-pudding."

Semihard; smooth; mellow; a kind of Cheddar, lightly colored lemon; yellow; strong, sharp taste but hardly any smell. Forty to a hundred-twenty pound cylinders. The rich milk from highland pastures is more or less skimmed and, being a very old variety, it is still made most primitively. Cured six weeks or six months, and when very old it's very hard and very sharp. A Cantal type is Laguiole or Guiole.

Semihard, rich, blue-veined, piquant, delicate, excellent imitation of Roquefort. Sometimes called "Danish Roquefort," and because it is exported around the world it is Denmark's best-known cheese. Although it sells for 20% to 30% less than the international triumvirate of Blues, Roquefort, Stilton and Gorgonzola, it rivals them and definitely leads lesser Blues.

A celebrated hand cheese made in Dresden. The typical soft, skim milker, strong with caraway and drunk dissolved in beer, as well as merely eaten.

Not only Dresdener, but dozens of regional hand cheeses in Germanic countries are melted in steins of beer or glasses of wine to make distinctive cheesed drinks for strong stomachs and noses. This peps up the drinks in somewhat the same way as ale and beer are laced with pepper sauce in some parts.

From the drinking cheese just above to dry cheese is quite a leap. "This cheese, known as Sperrkäse and Trockenkäse, is made in the small dairies of the eastern part of the Bavarian Alps and in the Tyrol. It is an extremely simple product, made for home consumption and only in the winter season, when the milk cannot be profitably used for other purposes. As soon as the milk is skimmed it is put into a large kettle which can be swung over a fire, where it is kept warm until it is thoroughly thickened from souring. It is then broken up and cooked quite firm. A small quantity of salt and sometimes some caraway seed are added, and the curd is put into forms of various sizes. It is then placed in a drying room, where it becomes very hard, when it is ready for eating."

Named from its butterfat content and called "Moors Head", Tête de Maure, in France, from its shape and size. The same is true of Fromage de Gras in France, called Tête de Mort, "Death's Head". Gras is also the popular name for Brie that's made in the autumn in France and sold from November to May. (See Brie.)

Imitation Gruyère, pasteurized, processed and made almost unrecognizable and inedible. Six tin-foil wedges to a box; also packaged with a couple of crackers for bars, one wedge for fifteen cents, where free lunch is forbidden. This is a fair sample of one of several foreign imitations that are actually worse than we can do at home.

Not named from the rush in which many of our cheeses are made, but from the rush mats and nets some fresh cream cheeses are wrapped and sewed up in to ripen. According to an old English recipe the curds are collected with an ordinary fish-slice and placed in a rush shape, covered with a cloth when filled. Lay a half-pound weight in a saucer and set this on top of the strained curd for a few hours, and then increase the weight by about a half pound. Change the cloths daily until the cheese looks mellow, then put into the rush shape with the fish slice. The formula in use in France, where willow heart-shape baskets are sold for making this cheese, is as follows: Add one cup new warm milk to two cups freshly-skimmed cream. Dissolve in this one teaspoon of fine sugar and one tablespoon common rennet or thirty drops of Hauser's extract of rennet. Let it remain in a warm place until curd sets. Rush and straw mats are easily made by cutting the straw into lengths and stringing them with a needle and thread. The mats or baskets should not be used a second time.

The finest of several superb mountain-sheep cheeses in Portugal. Other milk is sometimes added, but sheep is standard. The milk is coagulated by an extract of thistle or cardoon flowers in two to six hours. It is ripened in circular forms for several weeks and marketed in rounds averaging five pounds, about ten by two inches. The soft paste inside is pleasantly oily and delightfully acid.

A national pride, named for its country, Swedish cheese, to match Swiss cheese and Dutch cheese. It comes in three qualities: full cream, ¾ cream, and half cream. Soft; rich; ready to eat at six weeks and won't keep past six months. A whole-hearted, whole-milk, wholesome cheese named after the country rather than a part of it as most osts are.

I. Vacherin à la Main. Savoy, France. Firm, leathery rind, soft interior like Brie or Camembert; round, five to six by twelve inches in diameter. Made in summer to eat in winter. When fully ripe it is almost a cold version of the great dish called Fondue. Inside the hard-rind container is a velvety, spicy, aromatic cream, more runny than Brie, so it can be eaten with a spoon, dunked in, or spread on bread. The local name is Tome de Montague.

II. Vacherin Fondu, or Spiced Fondu. Switzerland. Although called Fondu from being melted, the No. I Vacherin comes much closer to our conception of the dish Fondue, which we spell with an "e."

Vacherin No. II might be called a re-cooked and spiced Emmentaler, for the original cheese is made, and ripened about the same as the Swiss classic and is afterward melted, spiced and reformed into Vacherin. 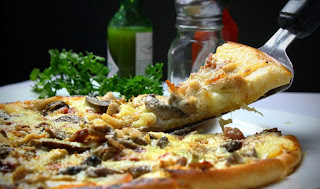